An Observation of Character

I've been cranking out the words lately, and I realized something about the characters that I create. Most of them are female, young, and don't like to follow the rules that society has set for them. They say that you put yourself in your writing, but I wonder if there might be an element of wishful thinking. They all do something that involves an element of bravery (or stupidity, depending on your perspective).

First there is my pride and joy, Melody. She isn't the best fighter, and probably not the smartest person to ever walk the earth, but she's got spunk. She wants nothing more than to be accepted for who she is regardless of gender or position, yet has a habit of inserting herself into other people's business. She's the main character of my novel Hands of Ash.

Then there is Tao. She's not the most pleasant person on the planet. Her cynical attitude and issues with the religious institution she's stuck working for make her difficult to deal with. She smokes like a chimney and will say a whole slew of unseemly things about your personality. She's rude and unseemly, yet is quickly turning into a fan favorite. Read her story here: Principium. She's also a character in my novel Hands of Ash.

The newest female protagonist to join my growing list is Scarlet the bandit. She came around as I was writing a story for a contest. The theme was to write a story from a villain's perspective. I decided to pick a female and go satirical. What I got can be read here: Why I Ain't No Hero. She's lewd and manipulative. Scarlet is perhaps the most masculine of my first two characters, and that's saying something.

In my current work I have a young woman named Mariann. Mariann is perhaps the meekest and most effeminate of my ladies. She keeps her head down and goes with the flow, but she wants out of the life she's been stuck with. Unlike Melody, Tao, and Scarlet, she's subtle. This was surprisingly easy to write for me even though my previous ladies usually have an element of loudness to them. Of course, this story is intended to be a tragedy, a sobering genre to begin with. I'll post a link for "Papers to Paradise" when I get it finished.

Not all my protagonists are female. There is Adamar. I have written one story about him, and have a second one in progress. (I actually didn't like the second one I wrote, so I'm rewriting it.) Unlike my ladies, he's quite and perhaps more mature. He also is more cerebral than the girls, but not  the scholarly type. To say he's a worrier is not an overstatement. He spends most of his time trying to figure out what it means to be a Warrior, and what is the purpose of war. Yeah, he's a tad on the deep side. His first story is here: Red Autumn.

I had started a story for Cyn Fang, yet it has gone nowhere beyond a couple hundred words. Like Adamar, he's on the quiet side. He's also calculating. I don't know what this says about my view of women and men, but for all those who like to psychoanalyze everything, there it is.

I think I've said enough about my characters. I'll let you be the judge.

Note: I don't know if the site I've linked the stories from will let nonmembers read more than one if linked to it like I have. Let m know if you have problems for those who are interested.
Posted by Unknown at 9:46 AM No comments:

The Love I Give To Chapter 9

Ah, Chapter 9. You are the biggest headache of my life right now.


I know my overly dramatic statement might seem like hyperbole, but in all honesty, I think my finances are easier at this point. I have a couple longer chapters to revise, yet none are quite so depressing as 9. There is death, weeping, and all the horrible sentences I wrote when I was putting converting it to a digital medium. You see, 9 is the chapter where I learned my lesson that you should never be bored with what you write, or bored while you write. Then, when you go back and revise you get this... I know. Isn't it such a lovely mess, but it doesn't end there. I have plenty more where that came from. 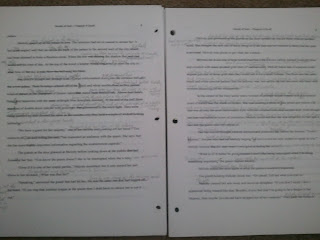 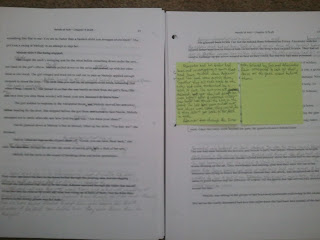 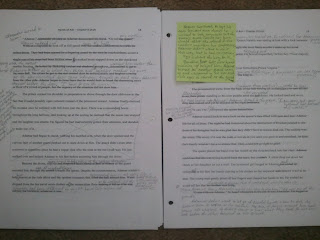 Yes, those are post-it notes. I had to come up with something to put entire chapter rewrites on since I print double sided. (Although, the first copy I made of the revision I flubbed and printed single side. 25 pages wasted when I could have cut that in half. Sorry, trees.)
I know that some of you reading this are saying that is how they should look after a good, hard editing session. A writer should cut out the sentences and words that are unneeded. Dialogue and descriptions that aren't up to par should be rewritten or chucked in the garbage can to be taken away with the refuse, but here is the thing that shouldn't happen. An editing session on a chapter shouldn't take two weeks. Yes, folks. Two whole weeks, maybe even longer.
You see, when writing this initially, I was bored out of my mind. I wanted to get it done so bad that I wrote a ton of whitewash boring sentences. There was no flavor, no spice, no love to them. Then I had to fix them. The reason it took so long, is that when I found myself feeling tired, I put it aside. I did not want 9 to have no flavor like it did before. I wanted it to be engaging. I wanted it to be filled with the love of the craft.
I don't know if I have succeeded at this point. I still have one more revision to do on it before I repost it up at my sources. Then it will be allowed to join the pile. 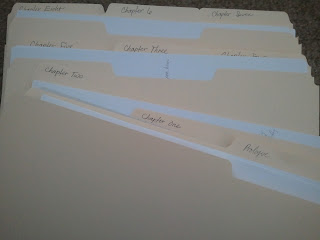 Above is the pile of folders for the Prologue through chapter 8. They wait patiently for me to put 9 through 14 with them, maybe even 15 since I'm almost done. I guess I will just have to take up the NaNoWriMo call and finish my novel before the end of November. (Thanks for making me feel guilty, Typewriter Mike.) Whether I get there or not depends on how persistent I am...
... and how good Skyrim is.
If you know me, text me, email me, Facebook me, or kick me and tell me to get my ass going. I know my husband isn't going to be the one to light the fire under my ass.
Posted by Unknown at 11:29 AM No comments: 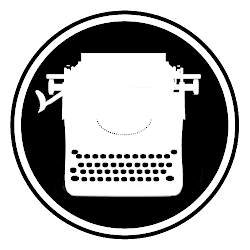